My major project right now (because I’m not really out there hustling for art projects like I should be) is an album cover for my husband’s band.  I’ve been putting it off and putting it off, and I’ve had multiple ideas, but I’m starting to solidify them.  Which is good because he’s almost done mixing.  He’s a perfectionist, I totally have lots of time.

Here’s where I started with the idea that I really, really like more than any of the other ideas:

You can see some prototype ideas that I was working through.  I’m still torn on a few of them because I’m not sure what I want my ultimate medium to be.  Maybe paint, maybe charcoal, maybe photograph.

So I made a new sketch using Google search results for “skinny male guy” which is not even the weirdest thing I’ve Googled today.  Also, the one I used most was calling skinny male models ugly?  Rude.

My sketch was fine, but clearly that’s not the size and shape of traditional album art.

So obviously I drew lines and then attempted to erase them.  This is only a sample, so any professionalism I have is out the window.  Also.  I have no professionalism.

So I laid in some details and some colors:

Added in the album name and realized I should have done it in pencil first AND I totally shouldn’t have used the awful pastel crayon things from the generic “art box” someone thoughtfully gifted me even though they don’t know anything about art and I feel so bad for disparaging their gift and just typing it is making me feel so guilty. 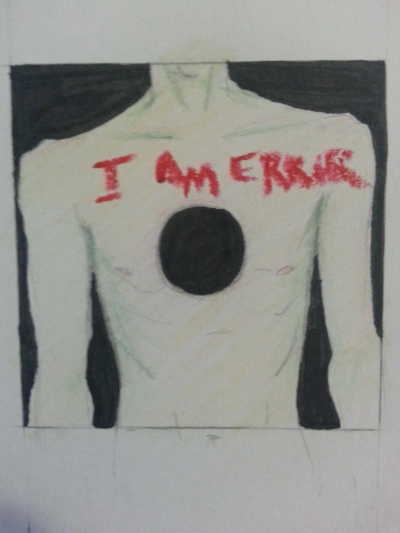 I then showed my husband.  But…he had an idea.  Which resulted in my attempting to punch a piece of paper unsuccessfully.

I was just trying to make a reference.  He wanted skinny model to be holding a piece of paper with a hole shot through it.

So I laid down a new sketch.  With less enthusiasm.  It was getting awfully close to my bedtime. 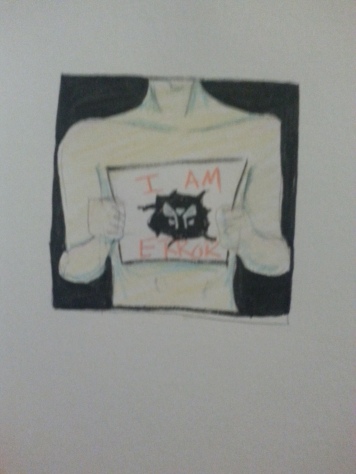 In any case, I’m so going to make it giant.  And I’m so excited I might take a day off of work to do that.

View all posts by thepaintedspreadsheet